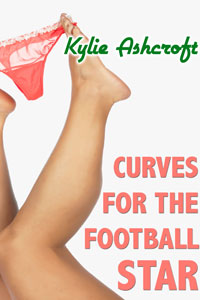 Synopsis
Meg was a loser in high school. When kids weren’t making fun of her they were ignoring her. Ten years later she’s a confident, curvy lady with a sexy husband, so she decides to attend her high school reunion. When she sees her old high school crush Josh, she realizes he still makes her weak in the knees. As she finally gets up the courage to talk to him, he reveals that he has the hots for her curvy body and wishes she wasn’t married. Now Josh is a rich and famous football star and Meg decides she doesn’t want to miss out on the once-in-a-lifetime chance to sleep with him, so she makes an indecent proposal. Will they let their passions take over or leave the past to the past?

This 6200 word short story is for adults only and contains a curvy girl hooking up with her high school crush, including explicit oral sex, infidelity, and a hot one night stand in Mr. Clark’s chemistry lab.

The lights were out in the hallway and Josh offered me his hand as we slipped out of the gym. My heart was pounding in my head as we hurried down the hallway, the door slamming behind us and leaving us in near darkness. The warmth of his hand pulling me forward somehow kept me calm even though I felt for a moment like things were spinning out of control. I wasn’t supposed to want this, but I did. I was excited. I could feel my panties clinging damply against my sex. I couldn’t deny that.

Every fifth light in the ceiling glowed at half its normal output, and as we passed quickly through those beams I watched him in front of me, moving forward, never glancing back. Then suddenly he stopped, his arms around me before I could stop moving. Josh pushed me up against the lockers, the metal surprisingly cool through the fabric of my dress. His face moved towards mine, stopping for a moment to gaze into my eyes before his hand grabbed my neck, holding my head steady as he kissed me.

My knees went weak for a moment–a silly cliche but this was a moment I dreamed and fantasized about for so many years and I was breathless in his arms. Josh’s body was warm as it pressed against mine, his arms firm and muscular. I could feel the hardness of an erection growing in his pants as I grabbed his sides and held him close. Shivers danced through my body as his thumb stroked a sensitive patch of skin behind my ear. I was like ice melting into liquid in his hands, ready for him to tear off my dress and fuck me up against the lockers.

He pulled away, one hand trailing down my arm until he grasped my palm.

“You ever have sex in the school?” he whispered.

His smile was mischievous and he pulled away from the wall, tugging me along behind him as he headed toward one of the doors.