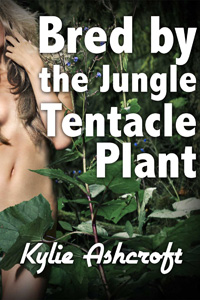 This story is also published under the title “Mating with the Jungle Tentacle Plant” at some retailers.

Synopsis
Dr. Elizabeth Morrel is exploring the rainforest in search of the rare ontalya plant, which may be the cure for cancer. When she finally discovers it after months of searching, she’s suddenly overtaken by unexpected horniness. As she seeks relief, Elizabeth realizes the ontalya is more than just a plant, but actually an alien creature looking to breed with her. Will Elizabeth help the creature with its sexy plan or try to escape its grasp and abandon her research?

She felt something on her ankle, slithering slowly over her pants leg. She started kicking at it with her boot, assuming it was a snake. But when she sat up, the slender green thing that was attempting to crawl up her leg was much too long to be a snake—in fact, its tail stretched back, up the tree and joined the mysterious vine. It was the vine.

Elizabeth tried to scoot away, but the vine was faster, quickly wrapping its way around her ankle and holding her in place. This part of the vine wasn’t as thick as what wrapped around the tree, but it was strong and she couldn’t kick it away. She looked around for her bag, but it was out of reach lying near the base of the tree, so going for her knife wasn’t an option.

Before she could react, she felt a light tickle on each of her wrists, and then her arms were yanked over her head by two other vines that appeared from the other direction of the forest. Elizabeth snapped her head around, looking for any more of these strange vines.