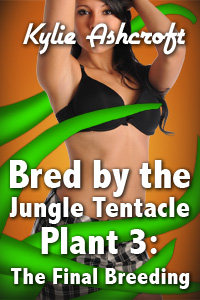 Synopsis
This is the HOT sequel to “Bred by the Jungle Plant” and “Part 2: Breeding in Paradise”!

Dr. Elizabeth Morrel is back working in her pharmaceutical lab in California, but she hasn’t given up her search for the mysterious creature. After a news story breaks about a sighting at the dorms of a nearby university, the scientist realizes the creature is nearby and breeding the sexy young coeds at SDU.

When a mysterious young intern shows up at her lab with a strange interest in her search for the jungle tentacle plant, Elizabeth realizes the creature may be closer than she thought.

“Take a seat,” she said, motioning towards the futon as she walked over to her fridge. “Want a beer?”

“Sure.” Gavin sat down, looking at the few posters hanging on the walls: a movie poster for Amelie, a periodic table where all the elements were drawn as cartoon characters.

“Here you go,” Trish said, holding out a frosty bottle and taking a sip of her own as she sat down next to him.

“Thank you,” he said, tipping the bottle towards her in acknowledgment before he set it down on the side table.

Trish slowly turned her body so their knees were touching ever so slightly. Now was the inevitable awkward moment when she didn’t know what to say or what to do, the moment she wished she could skip past. She took another sip of her beer and then set it on top of a magazine on her coffee table.

Before Trish could react, Gavin’s arms were around her, their mouths slamming together in passionate, hungry kisses. She hugged his torso back, surprised to feel defined muscles underneath. He didn’t seem like the type to go to the gym, but his body told a different story.

The last time Trish had slept with a man was over six months ago, after an awkward blind date with a guy her best friend set her up with. She had one too many glasses of wine and fell into bed with him faster than she would like. Then, of course, she never saw him again.

Gavin was different—sure he was a little bit younger than her—but he was very attractive and very funny. She didn’t see anything long term or serious with him, but she definitely could imagine a quick and sweaty fuck.

Their hungry kisses turned sloppy as her head started to feel a little foggy. There was a strange scent in the air—something floral, organic. Though it tickled her nose, she was too swept away by Gavin’s kisses to give it much thought. The beer must have gone straight to her head because she was feeling light-headed. She didn’t want to stop though.