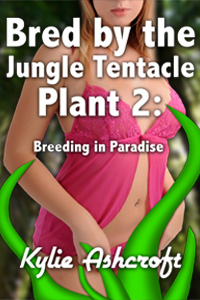 Synopsis
In this sequel to Bred by the Jungle Tentacle Plant, Dr. Elizabeth Morrel is pregnant after her encounter with an alien tentacle plant in the rainforest. Her plans to go home and study this creature in her lab are thwarted when she goes into labor and the creature escapes.

Kaycee is on a spring break vacation with her boyfriend Rick in Brazil. When he leaves her wanting after a dirty hike, she discovers there’s another creature interested in pleasuring her, though she has no idea what the creature has planned for her. Will she give in to naughty temptation or pass up on the adventure of a lifetime?

The creature didn’t move, and Kaycee started to wonder if maybe she was hallucinating the whole thing. Maybe this whole day was some bizarre dream that was turning into a freaky nightmare. She wasn’t scared, though.

As she considered moving, the creature’s appendages rippled and then it slid down the side into the tub, the shower water pounding on it. It seemed to like it, spreading its body out flat so as much skin as possible was sprayed by the hot water. It’s appendages splayed out to each side, wriggling in pleasure.

Kaycee realized exactly how strange it was that she was standing here in the shower watching this creature and reached for the curtain to climb out when she noticed something out of the corner of her eye. She turned back to the creature and stared in amazement as its little legs started to grow. They were all squirming and twisting, growing longer and thicker, some growing faster than others. It was bizarre as if somehow the water was empowering this creature, making it grow at an alarming rate.

Some of the legs were growing as thick as her forearm, looking like long, thick tentacles. She was so transfixed by the all of the undulating appendages, Kaycee didn’t notice the thin one that was snaking towards her foot.