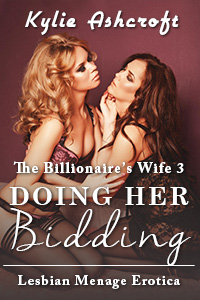 Nancy hasn’t stopped thinking about the billionaire’s wife since their hot and steamy night together. But Gwen wants Nancy to prove herself before she’ll let her into her bed again. Gwen wants her to seduce another woman for her and prove she won’t get jealous. But the question is, can Nancy seduce a woman? And can she handle two women in bed?

“Why, hello,” Gwen said as she appeared from the bathroom. Her dress was gone. Instead, she wore a lacy nighty with a long silk bathrobe over it. “Looks like you two decided to join my private party.”

Diana was grasping at her clutch for dear life as Gwen approached her. I could see that Gwen was hypnotizing her with her confidence and the smooth way she walked, swaying her hips from side to side.

Gwen stroked Diana’s cheek, smiling like a cat about to catch her prey. “You look lovely tonight, Diana.”

Gwen pressed her finger under her chin and kissed her lightly.

I felt relieved that Gwen would take the lead now and also a little turned on watching Gwen kiss Diana—the woman I seduced for her.

“Now,” Gwen said, taking the clutch from Diana and tossing it on the table next to an armchair. “I’m going to watch you two.”

“You’re both so sexy, I want to see you together.”

“Oh, I—” Diana’s cheeks flushed red, as she bashfully looked at me.

“Don’t worry darlings, I’ll have my fun too, but I want to watch you.” She ran her fingers down Diana’s back. I could see her shiver. “I want to see everything.”