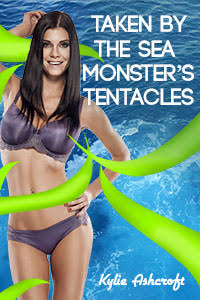 Dr. Kendra Hackett is three months into her assignment on the deep sea lab Aequor 1. She misses life above the surface, especially spending her nights with a sexy guy. One day, her boring lab job gets a lot more interesting when she discovers an unknown creature.
As she examines the creature, it starts to grow and quickly becomes interested in her. What starts as panic quickly becomes curiosity when Kendra realizes the creature is feeding off her energy and its tentacles are capable of stimulating unimaginable pleasure. Kendra is stuck wondering if she should fight for her life and the integrity of her experiments or give in to the sea monster.

Suddenly the creature jumped up, wrapping a tentacle around her finger before she could withdraw her hand from the tank. She flung her arm outward, hoping to whip the creature away, but it clung tight to her, its tentacles coiling around her hand and wrist.

“Oh god! Oh god!” Kendra shook her arm and banged the creature against the wall, but it didn’t loosen its grip on her. Grabbing a pen from a nearby desk, she tried to pry it off of her. Nothing was working.

Kendra tried to catch her breath and calm her mind. She needed a good plan to get this thing off of her, preferably one that didn’t require waking the entire crew to her foolishness.

As she calmed down, Kendra realized that it didn’t hurt. While the creature was clinging tight to her hand, she felt nothing except for its cool, slick flesh against her skin. Which meant either it had anesthetized her skin against pain or the creature wasn’t eating her the same way it had devoured the fish.

Kendra raised her hand to look at the creature more closely. It glowed periodically, tentacles writhing against her skin. She wiggled her fingers, and the creature undulated with her movement. So it was hugging her but not eating her? But it was still growing, the tentacles stretching further up her arm, past her elbow now.

If it was growing it had to be eating something—but what? Not her flesh.

This was bizarre, freakish, unnatural. But Kendra didn’t want to stop. It was wrong—not only ethically but morally. How was she supposed to stop it?

The skin of the creature got warmer as the creature grew, the tips of its longest tentacles caressing over her shoulder, teasing the skin under her tank top. She hadn’t been touched there in so long—not since starting this mission—and it felt so good.