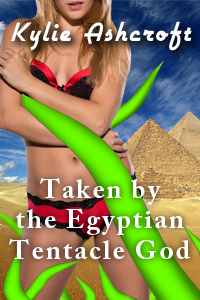 Synopsis
When Lacey and her friend Trish decide to go on a college trip to Egypt during spring break, she doesn’t expect to have any fun. During a boring tour of an Egyptian temple, Lacey decides to sneak off, discovering a hidden room where a cursed god has been locked away for 5,000 years.

After summoning the god Sabni from his cursed slumber, Lacey discovers he needs her help to break the curse. Sabni needs to take a bride to produce an heir and Lacey isn’t sure about his proposition, especially after she sees his tentacles!

Sabni was shirtless, his skin sun-bronzed and taut over his muscular abs. A white cloth draped over his hips, wrapped and tied in the front, muscular thighs forming below it.

“You will be my bride and we will mate to break the curse.”

“Wait—what? I mean, I—” What the hell had she gotten herself into?

“I, uh.” Lacey fanned herself with her hand. Was it getting hotter in there? How had a boring museum tour turned into a proposition from some magical ancient god? Though Sabni was hot, and Lacey was in between boyfriends at the moment…

“Make your decision now or leave my presence.”

“Wonderful.” Sabni’s body was nearly fully formed. His legs were bronze and firm, with toned muscles most men only dreamed of during leg day at the gym. Lacey was beginning to feel intimidated by his size—he was two or three times bigger than her. But as the last of the glowing orb fizzled away and Sabni lowered to the ground, her concern switched to what was hiding beneath that cloud of light.

Curling and slithering around his legs were several strange appendages, smooth and varied in color, long and flexible, tapered to a tip. There was maybe a dozen, all slinking out from the garment tied around his hips. For lack of any better comparison, they made him appear as a giant squid with his tentacles gathered around him on the floor.

Though she knew she should be afraid, that perhaps this creature that claimed himself to be a god was actually a monster, she was curious. And as much as Lacey didn’t want to admit it to herself, the tentacles were kind of hot. She wondered what they would feel like against her skin, touching the secret parts of her body.