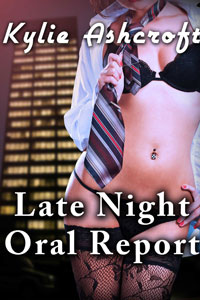 Synopsis
July is hot and there’s a drought. For Morgan, it’s more than just the lack of rain outside. She’s stuck watching the office during a blackout until the night guard arrives. Expecting to spend the night alone, her cocky floor lead Charlie shows up unexpectedly. When Charlie makes an indecent proposal, suddenly the heat around her isn’t just because the AC is out of commission. Will she give in to her desires or let the storm pass?

Charlie was already moving down the long rows of desks to the other side of the floor. He heard the kitchen door close behind Morgan and turned around. “Are you following me?”

“I have to make sure you stay out of trouble.” Morgan cursed herself after she said it. It sounded flirty.

“Yes, Miss Morgan,” he said like a submissive schoolboy.

Charlie headed straight for his desk.

“Here it is.” He held up the phone, the screen glowing in his hand.

“Great, there you go.” Morgan stopped at the end of a row of desks as Charlie came towards her. “Have a good night.”

He stopped next to her. “You sure you don’t want me to stick around until Ted gets here?”

“No. It’s hot enough in here already without you around.”

Charlie raised an eyebrow and grinned. “Morgan, are you hitting on me?”

“Watch it. I’m still the boss—even if you’re off the clock.”

He took a step towards her. “I could go on the clock…if you like.”

He was very close to her now. She could feel the heat coming off of his skin and smell his flesh. It was not unpleasant, the scent of his cologne with a little of his natural musk. Still, she was trying to keep herself composed. She should push him away—order him to leave and threaten to call the police if he didn’t. She couldn’t move though—didn’t want to move.

“You’re a very naughty girl Miss Watson.” He fingered the buttons on her blouse, peering down at her exposed cleavage. “I don’t think this is workplace appropriate attire.”

Select your favorite retailer to buy and download the story instantly: